The School Bus Seat Belt Debate: What Your District Needs to Know About Benefits and Barriers 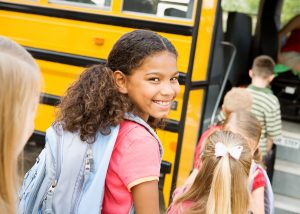 Every fall, social media feeds are dotted with heart-warming photos of moms and dads watching their children get on the school bus for their first day of school. This iconic moment is one that conjures thoughts of tradition, advancement, and accomplishment, even though behind the smiling eyes, parents worry about what will happen to their child when the school bus driver closes the door, and the bus pulls away. Will their child like his teacher? Will she make friends? Will he feel homesick?

And what about the ride to school? For many parents, a Kindergartener’s first bus ride might be one of the first times that their child has not been secured in a booster seat. There are so many rules when it comes to car safety, but what about school bus safety?

In 2006, 21 West Brook High School soccer students were injured when their school bus turned over near Devers, Texas, on the way to a playoff game. Ashley Brown, 16, and Alicia Bonura, 18, lost their lives in the tragedy. Four years after the accident, as a result of ardent advocacy by impacted parents, the State of Texas passed a law—Ashley’s and Alicia’s Law—that requires some school buses in the state to include seat belts.

Most school buses in the United States are not equipped with seat belts or restraints. Federal law requires that they are installed in buses under 10,000 pounds; however, buses of that size represent only a small percentage of buses in use today. Buses of this size are most typically used to transport disabled and other special needs students. Beyond this federal requirement, each state may decide whether or not to require seat belt installation in its school buses. Today, the states that require three-point seat belts in school buses include California and Texas, while Louisiana, Florida, New York, and New Jersey only require lap seat belts in school buses. Even in busses where seat belts are installed, there may be no rule for students to actually use them.

Statistically speaking, the odds of a school bus injury are low, in part because the vehicles are designed to be as safe as possible. Several studies have determined that school buses are the safest form of ground transportation, with The National Safety Council advising that it is 40 times safer for a parent to place his child on a school bus than to drive his child to school in the family car.

The National Highway Traffic Safety Administration (NHTSA) advises that around 440,000 school buses transport 24 million students over 4.3 billion miles annually. Among those, about six students die each year in school bus accidents. Comparatively, around 800 children lose their lives in accidents related to biking, walking, or driving to school or riding as a passenger in someone’s vehicle.

Part of the reason that school buses are comparatively safe is due to their design. Traditional school buses, the kind that comprises 80 percent of school buses on the road, are designed so that students ride higher off the ground. They are also designed with closely aligned seats covered with four-inch-thick foam. These factors create a condition called compartmentalization. In a collision, a child would theoretically collide with a seat in front of them, which would absorb the majority of the impact.

Despite safety design aspects of school buses, even one life lost annually is one too many, so why are national transportation agencies and state leaders resistant to mandatory seat belt installation? The three most significant factors involve cost, compliance, and safety.

The NHTSA estimates the cost to add seat belts to a new school bus would range from $8,000 to $15,000. Also, adding seat belts would mean fewer students would fit on each bus, resulting in the need to increase each district’s bus fleet by 15 percent to accommodate lost space, further adding to budget concerns. Given the minimal number of students injured on a school bus annually, many states are hesitant to invest.

Every parent can empathize that simply telling a child, pre-teen, or teen what to do, does not mean the child will follow through. Seat belts installed on school buses will only be effective when used by the students, but who will monitor seat belt usage and ensure kids remain belted throughout the duration of the ride? School bus drivers are primarily responsible for safe student transportation, which means unwavering attention to traffic and road conditions. With dozens of playful and often rowdy kids on-board, what resources or leverage does a school bus driver have to enforce seat belt compliance? Many drivers argue, not much.

Finally, some experts argue that lap belts or even three-point seat belts would not be a difference-maker in the event of a devastating accident. Similar to the reasons why traditional seat belts can be unsafe for minors in a traditional passenger vehicle if misused, a seat belt on a school bus could cause a severe neck or abdominal injury. Also, some experts argue that in the most devastating accidents, the ones that result in loss of life, seat belt use may not necessarily guarantee a better outcome. The majority of school bus passenger fatalities occur when the passenger is seated in the direct line of the crash impact.

If your school district is located in a state that requires seat belts, what are you doing to educate students, parents, and bus drivers, and encourage proper use and enforcement? If your school district is not located in one of the six states that enforce seat belt installation laws today, what is the narrative shared among parents and school leadership regarding the efficacy and need?

The most impactful step your district can take is to maintain open lines of communication with parents, listen to concerns, and continue to mandate bus safety training and rule enforcement for students and drivers. While the possibility of a school bus accident is statistically low, the topic of school bus safety and seat belt use must remain top-of-mind among school leaders. As vehicle safety technology improves and more research is conducted, take what you learn and use it to provide the safest possible route to school for every student.

2 Responses to “ The School Bus Seat Belt Debate: What Your District Needs to Know About Benefits and Barriers ”