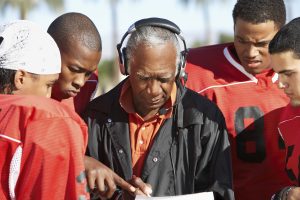 What does it mean to be a coach? It means being accountable for the outcome of a game—win or lose. It means being a counselor to players, a mentor, and a friend, over the course of a season, or even years. It means pushing players to reach their full potential in practices and on game days, and it means inspiring those around you not to quit, even when circumstances seem insurmountable. Being a coach means being a leader—someone who leads from the center of the huddle and always ensures his players know that he/she has their backs.

This Sunday is the Big Game. Regardless of which team you’re rooting for (or even if you’re only interested in the TV commercials), reflect on what it means to be a leader in your school district. We invite you to draw inspiration from some of the nation’s most accomplished and esteemed football coaches of all time. What follows are lessons on leadership from some of the most winningest coaches in their own words.

Many football fans remember Bear Bryant as the triumphant Alabama football coach who was so frequently adorned with a distinct black and white houndstooth fedora. What many may not remember, however, is that Bryant was almost out of a job in the early 1970s when his team could not exceed past the point of mediocrity. Unrelentless and unwilling to quit, Bryant implemented his now-famous wishbone offense, which led to a streak of eight SEC Championships and three national titles.

What is a program, initiative, or process in your school district from which you have withdrawn?

Instead of retiring the program or quitting on the process altogether, could a fresh approach or a recommitment to innovation provide the spark needed to go from floundering to flourishing? Seek input from staff and faculty and collaborate on how to re-engage and reinvent a program that needs your attention in your district.

“We find it so odd when women lead men, but women have been teaching men for years. We have to normalize it.”
– Katie Sowers

According to CNBC, “Women account for nearly half of the NFL’s fan base, yet they make up just a third of league employees.”1 Katie Sowers is the Offensive Assistant Coach for the San Francisco 49ers. (You may have even seen her on a recent commercial for Microsoft Surface.) Katie Sowers is the second woman, and first openly gay woman, to ever coach in the NFL behind Jen Welter, who was an assistant coaching intern for the Arizona Cardinals in 2015.

So how did she get to be one of the only women to coach in the NFL?  Through hard work, determination, and perseverance, knocking down barriers along the way. She had her big break when Scott Pioli, a former general manager of the NFL’s Kansas City Chiefs noticed her and offered her a coaching internship during the preseason as part of the Bill Walsh NFL Coaching Diversity Fellowship. Katie said, “I think we’ll get to a point when a woman is hired and it’s not a headline.”2

Is your leadership team diverse?

According to the US Department of Education, of our nation’s 13,728 superintendents, 1,984 today are women.3 Yet 72 percent of all K-12 educators in this country are women. In addition, most school boards still contain a majority of men, according to the last two 10-year studies by AASA.4

“Setting a goal is not the main thing. It is deciding how you will go about achieving it and staying with that plan.”
– Tom Landry

Why do we today consider the Dallas Cowboys to be “America’s Team?” It is most likely because of Tom Landry. He was one of the first NFL coaches to hire a quality control coach to study game film to assess and strategize against Dallas’ opponents. He was also one of the first NFL coaches to add a strength and conditioning coach to his personnel. As a result of Landry’s unique approach to preparation and strategy, the Cowboys earned 20 consecutive winning seasons.

Where do your faculty and staff need more support resources?

Do you have staffing, technology, funding, or other resource gaps that are creating barriers to student achievement success? Consider holding frequent open dialogue with faculty, staff, and parents, and ask what tools they could use to produce higher-quality academic outcomes. Then put a plan in place to obtain the support mechanisms needed to reach your shared goals for your students and district.

Leadership Lesson #4: Be a Leader Who Teaches

“They call it coaching, but it is teaching. You do not just tell them . . . you show them the reasons.”
– Vince Lombardi

The role of the teacher may come naturally to you if you have ascended to your current position after years of working as a teacher in one of your schools. Regardless of the path you have taken to your current job, Lombardi’s sage advice applies to all leaders. While coaching the Green Bay Packers, Lombardi became known for his single-minded determination and tight-fisted leadership. While disciplined and highly devoted, Lombardi didn’t use his authority to berate or belittle his team. He understood his role was to guide his players, not shout orders at them. As a result, Lombardi led the Packers to five championships and victories in Super Bowls I and II.

What training could you facilitate to support your faculty and staff?

Are there techniques, technologies, or modalities that could benefit your students if implemented? Are there leaders in your district who would flourish with some one-on-one mentoring from you as a leader, teacher, and coach?

“It was a way of doing things, a leadership philosophy, that has as much to do with core values, principles, and ideals as with blocking, tackling, and passing; more to do with the mental than with the physical.”
– Bill Walsh

In his book, The Score Takes Care of Itself, San Francisco 49ers head coach Bill Walsh credits culture as the key that led his previously 2 – 14 team to three Super Bowl titles. Your district’s culture should define your mission, purpose, values, and the foundational elements that define what you stand for as a unified entity.

What is the culture of your school district?

This question is not meant to make you think of the slogan or mantra with which your students are familiar. Think beyond what is inscribed on the cover of your yearbooks to the heart of why people want to work for your school district as educators, facilitators, and administrative leaders. What motivates your staff? What is the goal or pledge to your students that everyone can rally behind? If you don’t have a culture code that immediately comes to mind, take time to create one with input from school leaders, faculty, and staff from all levels of your school district.

As the leader of your school district, you must divide your attention and efforts between areas of strength and success, and areas of need. It may be disheartening to hear that parents are unhappy about a program change, or teachers are talking to their union representatives about benefit changes, but remember that every question or concern is an opportunity to do better and lead higher.

How can you facilitate open dialogue with faculty, staff, students, and parents? Are you prepared for honest discussions about areas where your district—and possibly you as a leader—need to improve so that your schools can reach their goals? What are areas of improvement that you are already aware of, and what are you personally doing to move toward favorable resolutions?

The teams that make it to the Big Game this February 2 will not have arrived accidentally or by individual player talent alone. Behind every successful team is a determined, collaborative, and open-minded pedagogue and support system. As you head into the rest of the school year, challenge yourself to be the type of leader who will lead your district to the highest levels of team achievement.