Teens, Sleep, and Success at School 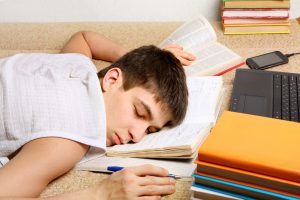 Could Your High School Students Benefit from a Later School Start Time?

The idea of teenagers loving to sleep-in almost is practically a cliché. Teens tend to stay up late chatting with friends, watching movies, doing homework, going to extra curricular activities (such as sports and clubs), playing video games, and socializing online—and as a result, they may report to their first-period class looking drained and behaving like sleep-deprived zombies. The problem, it would seem, is one of self-discipline and structured behavior, but could there be more to teens’ struggles to start their mornings with energy, ready to learn?

In October 2019, California’s Governor signed legislation that will require middle school classes to start no earlier than 8 a.m., and high school classes no earlier than 8:30 a.m.1 The law applies to both charter and public schools, leaving schools in rural districts exempt. The law and its changes will go into effect July 2022 or when a school’s collective bargaining agreement expires, whichever is later. What fueled California’s legislation was a belief that allowing teenagers to sleep in later during the school week will benefit their physical and emotional health and ultimately boost academic performance. (It should be noted that the length of the school day remains the same.)

Is there data that supports the belief that teenagers need more hours of sleep at this critical phase of their development, and could a later start time result in the improved educational outcomes that parents, teachers, and even students want to see from your schools?

In 2014, the American Academy of Pediatrics (AAP) released a policy statement explaining that adolescents who lack proper amounts of sleep are more likely to suffer from poor academic performance and health issues.2 The statement pointed at school districts that start their school days at what it described as too early as a contributing factor to these educational and health risks. The study attributes such behaviors as excessive caffeine consumption, daytime fatigue, and short sleep durations as evidence that young people are not getting enough quality sleep during the school week.

The Risks of Sleep Deprivation

Researchers who cite health issues related to teen sleep deprivation have found such detrimental risks as depression, obesity, delinquent behavior, and even traffic accidents as potential consequences of consistent fatigue. Research shows that for every hour of sleep that a teen loses at night, their odds of obesity increases by 80 percent due to their tendency to consume fat and carbohydrate-laden foods in response to feelings of fatigue.3

Teens who go to bed at midnight or later each night are also at a higher risk of depression and suicidal ideation—a terrifying health risk in an era that has seen teenage suicide rates on the rise.4

The Reasons for Insufficient Sleep in Teenagers

Such studies encourage school leaders to ask the obvious question: should not our teens go to bed earlier to get the sleep that they need? If we push back our start times, should we not expect that students will continue to come to class sleep-deprived? The question of behavior versus biology is a critical component of the dialogue that must surround optimal high school start times. According to the AAP’s research, there are a variety of factors that are contributing to poor teen sleep habits, including social obligations, modern lifestyles, and yes—biological processes.

The research found that teenagers accumulate sleep-wake homeostasis—a phenomenon that results in a more significant pressure to sleep the longer one stays awake—more slowly than other age groups. Put simply, teens that feel the pressure to stay up late doing homework, chatting with friends, and socializing are naturally inclined to want to extend their sleeping hours in return. Exacerbating teen sleeplessness in the evenings are such expected contributors as social networking and technical device screen time, which have been proven to decrease sleep quality by suppressing melatonin production, which, in turn, disrupts circadian rhythms. Since everyone can agree that smartphone and technology use is not a trend anyone expects to see reversed any time soon, the likelihood of teens turning off their phones early seems unlikely, regardless of parents’ best efforts.

Not only have districts with later start times improved student academic performance and focus, but they have also helped to save lives. A community in Kentucky that delayed the start time for its high school students reported a decrease in its average teenage vehicle crash rate by 16.5 percent.5 Further, a Virginia school reported a statistically significant reduction in student accidents over two years by pushing out its school start time.6

Every school leader wants to produce high-quality student outcomes and fill classrooms with attentive, thoughtful, and engaged students. While we as school leaders, educators, and parents may not be able to collectively change the cultural impact that technology is having on our teens, we may be able to give our students the best chance at healthy, safe, and productive development years. While the causes of teen sleep loss may seem simplistic, they are complicated and potentially extremely detrimental. With student emotional and physical health as well as academic performance on the line, every administrator owes it to his or her students to investigate the potential benefits of enabling high quality and quantity student sleep.

Posted in Staff and Student Well-Being, Student Success | No Comments »